Concrete is an essential structural material and it is crucial to make sure that it does not have any defects or faults. Ground Penetrating Radar (GPR) devices can be used to recognize any spaces, known as voids, within a concrete slab or beam. By employing GPR in this way, sometimes described as concrete X-raying, engineers can swiftly, safely and cost-effectively examine large areas of concrete during the construction phase. Any faults can then be corrected early, rather than at a later date when costs have risen and risks increased.

We provide a concrete quality inspection service to check for and identify defects in the concrete.

The common defects that we are asked to identify are:

Delamination is the term used when two sections of concrete placed together do not bond well and form two or more layers. This most commonly occurs when there is a delay during the pour. To the naked eye this can be hard to identify but with radar scanning we can identify the existence and extent of delamination.

Concrete can be left with a porous effect if the concrete is screeded before it has had time to bleed. As the water inside evaporates it leaves small voids where the water had been. This can be seen on the radar scanners we use. We can also determine this is by taking a small core sample and crush testing it at our NATA accredited lab. This test determines, among other things, the porosity of the concrete and the point at which it breaks with enough pressure applied. This can be determined by a direct tensile test or a simple crush test. 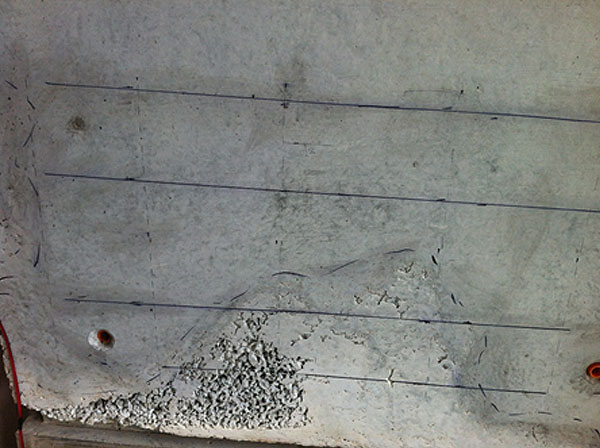 Honeycombing is a coarseness or stoniness in the concrete, sometime observable at the surface of the concrete. It is more than a cosmetic problem as it indicates an area of weakened concrete and will affect the durability and strength of the concrete. There are several potential causes of honeycombing. Sometimes it is because of insufficient fine material in the aggregate mix, sometimes it is because the aggregate was not effectively mixed, and occasionally it is caused by leakage of the grout or mortar component of the concrete around the formwork or at the joints. The extent of honeycombing is hidden beneath the surface but slab scanning using GPR can highlight the extent of the issue.

If the reinforcing bars (rebar) in the concrete slab move for any reason during the setting process, then the bars and concrete can de-bond or not bond at all. Some potential reasons that the rebars could move during the setting process are that the tradesmen were walking on the steel mesh during the pour as they operated the vibrators, or if it is a vertical concrete wall poured in sections, then the rebars that are visible until the next section is poured can move due to the wind. If the rebar moves too much a void can be created around the re bar. This is called de-bonding.

Skilled operators with the correct concrete scanning equipment can scan the affected area and provide details as to the location and extent of de-bonding.

All these defects can be identified using radar concrete scanning:

Impact-Echo Testing is a non-destructive method that finds internal flaws, such as cracks, in concrete structures using transient stress waves. By using this in conjunction with GPR we have been able to locate defects in the form of cracks, voids and a honeycombing in concrete slabs.