In May 2015, United Scanning was contacted by a large civil construction company engaged in building a $650 million plus component of a larger mining project in the Pilbara. As part of the project the client had been required to pour a very big and technically challenging piece of concrete for the structure. During the pour, something had gone wrong. On inspection, large voids, cracking and other defects were visible and United Scanning’s client feared that they would be required to cut up the concrete and repour it, an exercise that would have cost $10s of millions if not more.

In an effort to better understand the nature and severity of the defects hidden within the concrete, United Scanning was engaged to perform Non Destructive Testing (NDT) on the concrete. United Scanning was required to mobilise a team of 12 people to site within a week and to scan the entire surface of the structure as swiftly and comprehensively as possible.
The structure proved to be especially challenging to scan for a variety of reasons. First was the location. This project is quite remote and mobilising such a large team to such a remote site at such short notice was a large task in its own right.

The surface to be scanned added further challenges. The concrete was very rough and undulating, making scanning challenging to start with. The surface was also sloped with the steepest incline being almost 25 degrees, presenting a significant safety risk that had to be mitigated. In many areas there were significant quantities of exposed reinforcement. At some points on the surface, so much reinforcement remained exposed that it was impossible to walk over these areas, much less scan them.

Two other factors made this project even more challenging; size and complexity. The surface had an area of over 140,000 square metres, while the concrete itself had exceptionally high amounts of steel reinforcement.

In order to provide the clearest possible information for our client, United Scanning applied a variety of technologies. Firstly, we used Ground Penetrating Radar to identify areas of honey combing, voiding and cracking within the concrete.

One section of the surface was not as steeply sloped as the rest and and what exposed reinforcement was present in this section appeared only here and there. In this section United Scanning were able to apply a large multi-antenna array trolley mounted scanning solution for our client. This was used to scan a very large surface area in a short time period and provide both 2D profiles of the concrete and 3D imaging of the concrete condition. 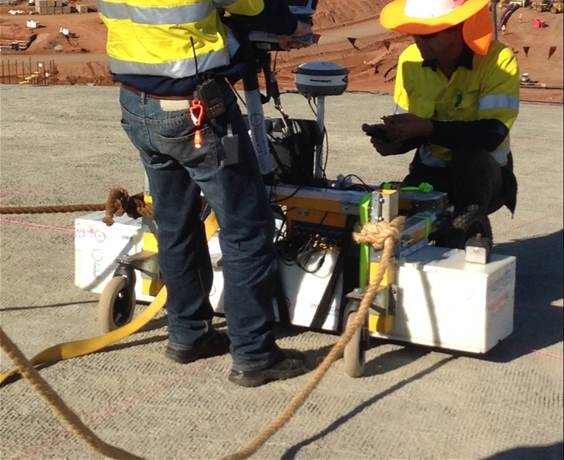 In order to acquire data at the level of detail required by our client United Scanning pushed the technology envelop, completely reconfiguring the multi-antenna array in ways that had never been previously done, anywhere in the world. This allowed us to almost double the resolution. As one client representative commented, United Scanning reduced the size of the net being used to catch these defects. This allowed us to locate relatively small defects even over a very large area.

In other areas of the dome where the steepness and amount of exposed reinforcing made the application of the trolley mounted scanner impossible, the team used hand held scanners. To meet the client’s objectives, the steepest and most defected parts of the surface were scanned using hand scanners at several resolutions, acquiring both 3D images and 2D profiles of the concrete in these areas. 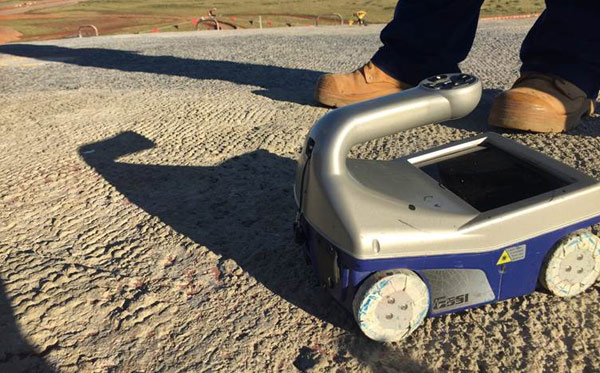 To provide our client with further confidence, United Scanning also used Ultrasonic Scanners to scan a proportion of the surface of the dome. This technology works in much the same way the ultrasound that is used in the Health industry work – high frequency sound waves were projected into the concrete and the resultant echoes analysed. Again, United Scanning performed these scans at very high levels of resolution and constructed from the resultant data sets 3D volumes which represented the concrete being scanned. Figure 3 : An Ultrasonic Scanner as used on this project

Add technologies like Impact Echo, surface mapping and thermal imaging to the mix and this project had more than enough to make it interesting. The team spent a little over 2 months on site and in that time acquired one of the largest and densest datasets of concrete data in the world, according to the Geophysical Archaeometry Laboratory who supported United Scanning on this project. Over 2000 pages of documentation, hundreds of reports and a massive amount of effort later and United Scanning has completed one of our largest and certainly our most complex assignment yet. Best of all we had provided our client with the answer to their problem, allowing them to save the surface and continue construction.