Here at United Scanning we work with concrete. We spend a lot of our time answering questions about concrete. This is because United Scanning lead the way in providing insights into concrete in Western Australia. Our expertise combined with our use of state of the art Ground Penetrating Radar technology has allowed us to provide value on some most significant and prominent projects, both in the Perth metropolitan area and in regional Western Australia.

Concrete is an incredibly widely used product and very important to the local economy, let alone globally. In fact, concrete is far and away the most used building product on the planet, and only one other product of any sort is used in greater volumes, water. Twice as much concrete is used as steel, wood, plastic and aluminum combined. According the United Nations Environment Program, 3 tonnes of concrete are poured annually for every man, woman and child on the planet!

It’s used in such massive volumes, 10 cubic km per year, because it is so useful. It can be poured into almost any shape and the mix tuned to handle a wide variety of conditions. It is relatively affordable, very durable and easy to move. It has qualities that justify its abundant use. But it has a weakness, quite literally.

Concrete is very good at absorbing compressive load. This means it is good at carrying load that would compress it, which would press it down. What it is not good at is handling other sorts of load and particular, shearing load. In other words, concrete doesn’t bend or flex at all well. 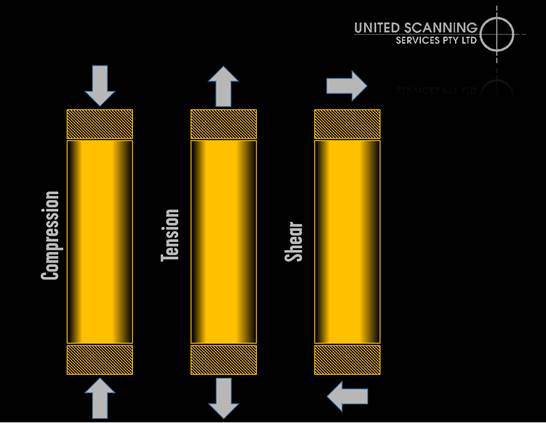 Unfortunately, while the addition of reinforcement is crucial to allowing concrete to meet the demand placed upon it by modern civil engineers and architects, its introduction does bring with it another problem.

Unlike concrete, reinforcing is a prone to corrosion. The cement paste does have naturally corrosion resistant properties, but in time and under unfavorable conditions, the reinforcing steel inside the concrete will begin to corrode and when it does, it will become weaker and less able to assist the concrete to carry stressing loads.

Managers and stewards of concrete structures need to aware of the effect of corrosion on the strength, durability and safety of the structure. If corrosion is caught early, it is possible to take preventative measures to reduce or even halt the speed of the corrosion. However, this does rely on early detection.

United Scanning have partnered with a National Association of Testing Authorities accredited laboratory to allow us to provide a full suite of corrosion testing for concrete. Some of the tests that can be performed to detect either corrosion or susceptibility to corrosion include:

Half-cell potential testing – This test can be conducted in the field by United Scanning technicians and detects the electric potential for corrosion that exists between the aged concrete and the reinforcement. Using it, United Scanning can provide a map of the structure showing any areas where corrosion has most likely occurred and the likelihood of corrosion in other areas.

These tests and others provided by our laboratory allow United Scanning to have confidence that they can answer the toughest questions around corrosion in concrete.

Call United Scanning today to talk to us about corrosion testing and how we can help you.