The Art of Cable Locating

United Scanning are Perth’s leading specialists in locating conductive pipes, cables and lines underground. While our technicians utilise very advanced Electro-Magnetic detection equipment including the Vivax Metrotech vLocPro 2, there is still a considerable art to the science of cable locating. While some locating jobs are straight forward, others require our technicians to utilise all their experience, technical skill and even intuition to discover the location of services concealed underground. 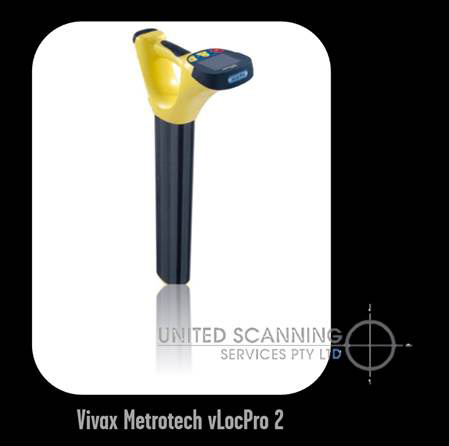 Cable locating, also known as EM Detection (Electro-Magnetic detection) relies on detecting a radio frequency signal that is generated when AC current flows down a conductive pipe or cable. Where a cable is live and already has an AC current flowing down it, the radio frequency signal generated as the AC flows can be used to detect the location and path of the cable.

It is when no signal can be detected from the service that the skill and art of the United Scanning technician becomes evident. When a cable is not live or the service being detected is a conductive pipe or some other conductive service, United Scanning’s technicians use one of a variety of methods to introduce a recognizable signal into the cable that enables them to detect its location:

However, successfully locating the cable or pipe relies on more than being able to introduce or ensuring there already is a recognisable signal flowing that can be detected. Once the United Scanning technician has selected a direct, inductive or passive mechanism to establish a recognizable signal, they must then also select the optimal frequency based on the signal properties that will best allow them to perform the cable location. Different frequencies behave differently and different cables and pipes and soil conditions will treat different frequencies in more or less optimal ways for detection purposes.

Low Frequencies (Up to 1kHz) 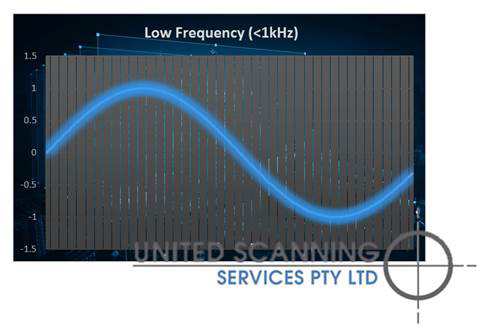 Medium Frequencies (From 1kHz to 40kHz) 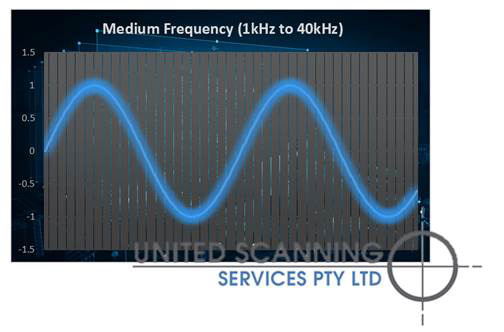 They are also more tolerant of cable faults and higher resistance. 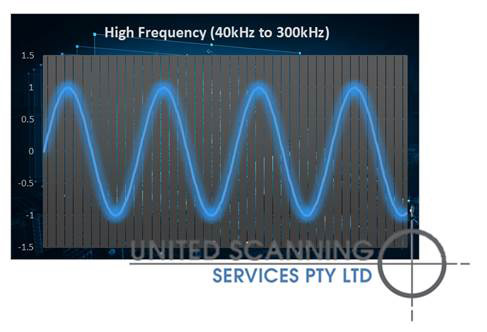 High frequency signals can be used to detect and much more challenging lines like dead ended cables, cables with breaks or cables with poor grounding. This range can also be used when the cable is heavily insulated or has high resistance joints (as may be the case with conductive pipes that have been glued together). High frequency signals are more likely to jump any breaks or over insulation and allow the signal to be detected further downstream.

Unfortunately, high frequencies also suffer from a high level of signal bleed into the surround soil and services. This significantly reduces its effective range and can compromise the accuracy of detection. High frequencies are more challenging in areas that are more congested as the signal may jump or couple with nearby conductors. This means that great care needs to be taken that the line being traced using a signal is in fact the target line or cable and not an adjacent one that the signal has jumped to.

Very High Frequencies (300kHz and above) 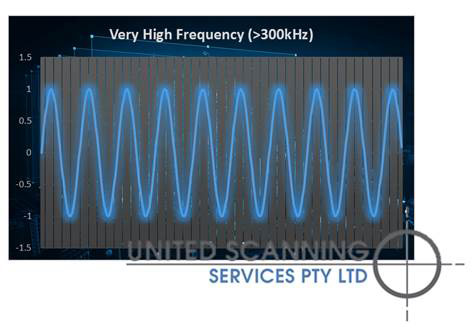 Great care is taken when using very high frequencies. These are used as a last resort when the line, pipe or cable is high resistive or damaged. These frequencies can easily flow through the soil, particularly wet or damp soil and the through any other buried conductors. These signals belled heavily into the ground, significantly limiting the distance over which they are useful.

As a rule of thumb, a United Scanning technician will select the lowest frequency that will produce a traceable signal over the distance required to be traced. The lower the signal, the longer the distance the signal is useful over and the less likely the technician is to trace a line that is not the target line.

United Scanning’s technicians possess the experience, the technology and the intuition to make the science of your cable locating, line locating and pipe tracing jobs look like an art form.